EI: THE POWER OF EMOTIONAL INTELLIGENCE 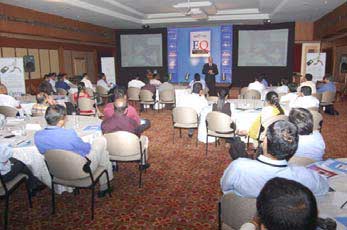 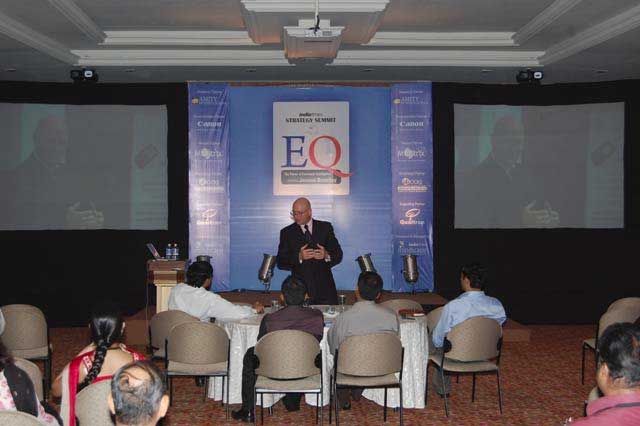 Emotional intelligence is a key factor to enhancing your quality of work & life
Peter Salovey , a Yale psychologist, has identified 5 Domains of Emotional Intelligence

This course presents a model of self-directed learning, which takes participants beyond the threshold of intellectual understanding into the realm of behavior change and the benefits of self-discovery.

Experiential Learning style will take center stage in this 2-day programme. Other learning styles will include :

HBDI Profiling Tool: In profiling the middle and senior managers, their personal thinking preference, behavioral preference and potential development  opportunities will be made visible. The HBDI, or the Herrmann Brain Dominance Instrument, is an instrument which measures thinking preferences. It is one of the most powerful and most flexible diagnostic tools available. World-wide, people are taking the instrument and integrating it into their own spheres of training, development, human resource and organization development.

Leadership Competency Assessment: A leadership criteria indices based assessment will be administered via a set of questionnaires. This assessment will allow us to accurately pin-point areas for development and areas of strengths as part of the talent and succession planning process. The criteria indices are made up of leadership competencies and core values which in turn is associated to 3 critical competency areas: Business Acumen, People Development & Decision Making.

Why do people instinctively wince when they get a call from their boss – even if he’s a nice guy who has never done the many harm ? The explanation lies in the ways our brain are wired says Jerome Bonnifay and it has nothing to do whether your boss is a nice guy or not. “Your brain’s job is to protect you, “says the founder CEO of HR consulting firm SBIC Services, “and it’s automatically wary of a person in authority who has the potential to hurt you.”

Which is why Bonnifay’s workshops always feature a snake. After all, if you can learn to get comfortable with a reptile that’s been a source of fear to the human species since time immemorial, what’s a boss? “The snake provides shock value, its cares people, “says Bonnifay, who intends to use it in a series of four seminars he’s conducting for India Times later this month. “But by the end of the day, they get over their fear and actually learn to manipulate the snake to do what they want.”

These kind of dramatic tactics have served to make Bonnifay a popular management speaker world-wide. He’s a global authority on Emotional Intelligence (EI), which he unabashedly describes as the art and science of manipulating others to do what you want. “We know that the best way to get people to do something is to make them actually want to d o it, “he says. “I teach people about the buttons they need to push to make this possible .”

Since it came in vogue some 20 years ago, EI has been the subject of some serious scientific and unscientific research and like any popular concept, it’s had its share of critics. Some say it’s too broad a term, impossible to measure accurately. Others refuse to recognize it as a form of intelligence at all and say it’s just a skill. Which suits Bonnifay just fine as he says, “I vulgarise EI and EQ to everyone’s level, so the can get something out of it.”

This Frenchman obviously doesn’t believe in obfuscation when it comes to choosing his words and it probably has something to do with the fact that he ‘s lived all over the world. Bonnifay spent six years in Delhi as a child in the 60s, when the French government sent his father to India to work on the country ‘s oil and gas programme . He later returned to France and graduated from the University of Poitiers and then moved on to d o his MBA from the Frederick Taylor University, California.

In 1993, he started SBIC Services in Kuala Lumpur, where he now lives. “One of my life goals was to settle in Asia. Most of my early work was between Australia and China and I finally ended up settling in Malaysia because it is a business hub for South East Asia,” he says.

Bonnifay is a bit of an EI evangelist, saying, “It is the single element that can allow you to outshine colleagues. It’s no use having high IQ if you can’t communicate it. And EI is not something people are born with. It can be learnt, it can be polished. Emotions come from the brain, not from the heart, as some people like to say. If you can influence the emotions of your clients, your colleagues or subordinates or boss, you can get them to do what you want.” While it’s useful in dealing with your immediate circle, EI really comes into play when you’re dealing with someone who is different and doesn’t speak the same language – an increasingly common situation in today ‘s globalised business scenario.

“If I’m an accountant speaking to another accountant, it is easy , “says Bonnifay. “But when an accountant communicates with a painter, EI is required, otherwise they will not understand each other.” Quite often, this means being able to make small talk before getting down to the business at hand . For example, in connecting with someone on the phone , those who successfully manage to engage in some conversational banter before getting to the point are usually those with high EI and they are at an advantage over those who don’t know how. “Small talk is part of building personal relationships and it always helps business,” says Bonnifay.

Some cultures nurture high EI in people so they connect with other cultures naturally. Others are only recently waking up to the importance of EI. China, for example, was considered inscrutable by the rest of the world till recently. Says Bonnifay, “The Chinese were not too bothered about EI till around ten years ago. They didn’t talk about individuals, they always talked about community.”

Meanwhile, recognising its importance, global corporates are now incorporating EQ tests into their recruitment and trying to improve EQ in those already recruited. Bonnifay has been a consultant to several such companies and says, “L’Oreal and Starbucks are two companies which implement EI measures thoroughly.

An insurance company recently did a five year survey among their sales staff to co-relate their performance with EQ and found that a strong co-relation exists.” It should be no surprise then that those in sales are the biggest believers in EI training. While in the field, they’re the ones who get all-too-frequent calls from their bosses and at Bonnifay’s seminars, they’re the ones who get to make friends with the snake.

Yes, the EI Seminar has helped me and my team understands and performs better. We shared the learning’s with the rest of the organization as well. As you had rightly mentioned EI is a journey and we are glad that we took the first step attending the seminar.

"He is emotionally intelligent to convey main points to participants and get everyone involved most of the time."

Image already added
It was a fantastic journey that we started off on during the EI seminar, would be more than happy to receive brain tips from you. Many thanks also to my HR manager who sponsored me for this program.

Have a great day!

It was an incredible experience to be at the seminar with you. You are such a special person and bring the subject alive with such ease and eloquence. It was wonderful to interact with you and I will be honoured to be added to the Emotional Intelligence Travellers List and the EI Forum.

Thank you so much for sharing and helping others in enhancing their potential.
Image already added

Image already added
Feeling great to hear from you. It was a pleasure attending your seminar. You did a splendid job. You really opened our perception on our mind. I was amused to know the details of how mind works. Looking forward to get associated with you over the Forum and get connected with likeminded friends.

Good luck to you & to your team.

It is indeed an “experience” during the 2 days training conducted by Jerome. It has opened my mind to see things in another perspective now and going forward in both personal and work. EI is a good tool and it would be good for your company too to market this training.
Image already added

It was nice meeting during EI workshop. It was wonderful experience interacting with you. The way you handle the subject was fabulous. The examples and the content was just apt. We all are confident that this will definitely bring improvement of our EI.